Let’s see what excuse should I use coming into Ironman AZ for anything less than the best.  Setting at an all time Iron distance bike course record of 4:04, top American Ironman finishing time in over a decade?

How about having raced 3 times in the previous 5 weeks gathering two wins and a second in strong fields, biking 224 miles averaging over 27.7 mph, following it up 52.4 miles under 6:25 pace?  How about a head cold?  Enough talk I race all cards in and I was still packing a knockout punch.

At 6:30am I was one of the final professional men to plunged into the 64 degree water of Tempe Town Lake for our 6:45am start.  For the next 15 minutes I would take a few quick strokes and just try not to let my body temp drop.  Finally at 6:45 my favorite sound…that damn cannon. 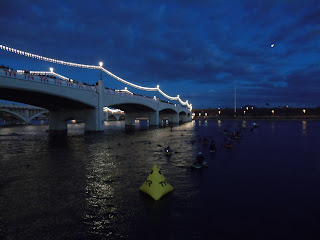 The swim start can be described as 60 finely tuned well rested professionals in a straight up drag race to the first buoy 1.2 miles away.  I felt great for the first 1/4 mile and got into a great position in the pack in the lead pack, yet I could not get settled in.  I was struggling cardiovascularly big time.  I eased off a bit and slowly slid toward the back of the pack which is a very dangerous game to play.  I sat on the back step of the bus and after what seemed to be an eternity we hit the 1.2 mile buoy and turned back towards transition. 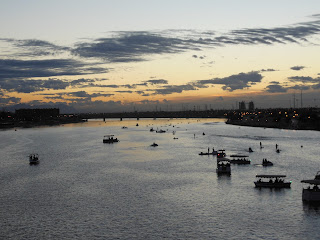 As we made the turn I took a good look to see how far back the next pack was back in case I got unhitched, it was the most motivational thing I did all day.  The next pack back was already minutes behind…come on baby do not lose these feet.  The next 1.2 miles seemed like 3 miles of holding onto the pack.  Finally the swim exit. 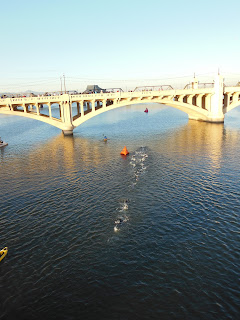 Transition 1 reminded me of an Olympic distance race, just a sprint for the bikes.  As I headed through the change tent I just checked and rechecked to make sure I had everything and dashed off to my bike.  I grabbed my bike and was off to have fun.

I got on the bike and quickly found my rhythm, it was like Florida again.  I sailed passed the convoy all lined up and saving Watts.  I set the metronome in motion and dropped into my aero position and let them know that I was “Game On.”  My legs were strong but not sharp like the previous two races in Florida.  At the first turnaround (mile 18.75) I had gotten 90 seconds, by the end of the first loop (mile 37.25) I was at 140 seconds. I turned around into the tail end of the age group field and was about to gut nearly 3000 age groupers who were clustered edge to edge across a single lane of 18 2/3 miles out and back course that was the bike course.  After what happened at Abu Dhabi this spring I was tense on the bike and riding heads up the whole time, this is when the race really started to change. How bad was it?  I saw multiple crashes including one that involved the lead motorcycle crashing out.  There were multiple ambulances hoisting athletes across the median.  I just stopped racing and just rode hard and tried to survive, I just wanted to make it to the finish line and to my wedding in two weeks.  I had lost track of where my competition was so I had no idea how big or small my lead was.  It was a relief to get out of the hornets nest at the end of the bike.

In T2 I grabbed my bag and ran into the change tent.  The volunteers were awesome wanting to know how they could help.  I asked for a cold beer, they told me they didn’t have one as I put on my socks and shoes.  I still can’t believe I got out of that chair.  It felt so good.

On the run course my legs picked up right where they were in Florida, 6:45-6:50 miles.  Yet Tollakson, Matthews, Frommhold, and VanBerkel each cruised by me over the course of the first 10 miles.  At each aid station the local triclubs were partying hard and were full service centers. I went through the first loop of three in just under an hour.  Perfect, three hour marathon pace.  I hit the half marathon at 1:30:10, boom, right on pace and I was starting to close back in on VanBerkel.  The stomach started to rumble and grumble and then a revolted full scale before I found mile 14.  This is the fork in the road either walk it off and call it a tough day or rebuild my race.  I trudged to the aid station just past 14 and then pulled it together and started from scratch.  A lot of cola and some pretzels as Tyler Butterfield took 5th away.  I decided that 7:30 miles sounded like a good plan and it was something I’ve done a lot in training and knew how to fuel.  The 2nd loop did not end up being too bad, 2:04 for just under 17.5 miles.  The final loop I was really thankful for having the three loop run.  I was able to get a lot of cheers and encouragement from the groves of spectators that lined portions of the course…and I needed it!

The final loop was muscle recall.  I just was head down focusing on getting to that finish, I would lose two spots in the final 10K but caught VanBerkel walking with a two liter of coke.  There could have been an aid station of topless ASU cheerleaders in those final miles I would not have noticed.  I was focused on getting to that finish line and hitting 7:30’s.  The final loop was spot on 7:30’s, the body was shot, the mind was smiling for overcoming a lot of adversity not only on the day but in the year.

Now it is time to take 4-6 weeks completely off, get married and spend time with family and friends.  Finishing 7th on the day was a great accomplishment considering the previous 35 days, yet not having a great performance on the final race of the season will definitely motivate me to train hard this winter.

I was notified on Monday that I set the bike course record by nearly 6 minutes, and I do not know if anybody has noticed a trend.  Since Kona the ONLY bike that has been in the lead of Ironman’s beyond mile 6 has been the new Orbea Ordu out riding pelotons on BOTH the men and women’s side.

And a graph for the engineers: