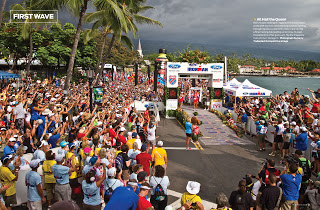 Where & When?
Let’s pick apart why only 91% of the time are there enough women to fill out the prize purse and less than 2/3’s of the time are there 10 women even finishing WTC long course races. On the men’s side it is a lot better with only 1 field not paying out and 92% of the fields had 10+ male finishers. First let’s start off with which regions are these races and how many people are finishing, or where the marketplace of the professionals is. 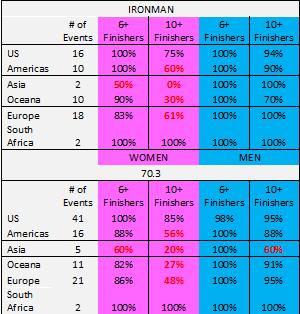 America’s is defined as North and South America excluding the United States. It is very apparent that the market in the Pacific Rim (Oceana & Asia) is just not there for WTC when it comes to professionals…and age groupers considering the races are not sold out. The men’s fields worldwide are full and deep with the exception of Oceana.  Meanwhile on the women’s side fields largely depended on the region the race was in. In the US on both the men’s and women’s side has deep fields while in Europe the fields are shallow. Now could the lack of participation in Europe and the Pacific Rim because of the challenge from the Challenge Family. 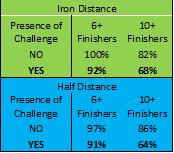 It looks very possible that Challenge’s presence, quality of event, has lured many away from Ironman events in these regions. Next let’s look at when and where the WTC events take place to see if there is an explanation why some regions fill fields and others do not. 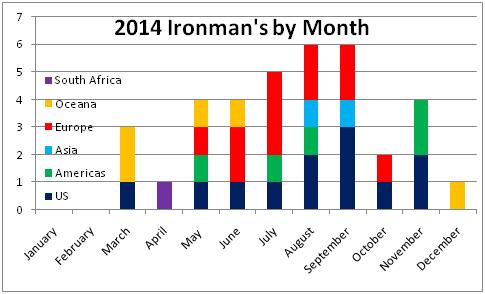 The Oceana and Asiana events are quite spread out and yet they do not yield deep fields and many times don’t even fill enough spots to payout.  The events in the US are spread evenly with a concentration of events in August, September, and November, yet these fields all have significant depth. Europe has the same concentration of events during the summer but lack field depth.  Now let’s look at the changes that are coming in 2015: 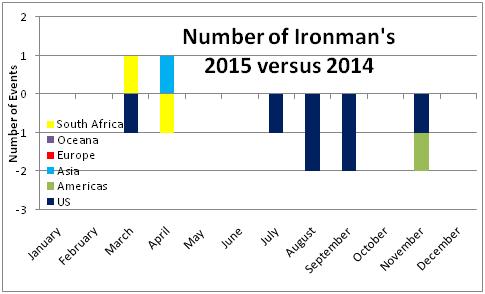 Europe and Oceana do not lose any events even though less than 50% of the women’s events get 10 women finishers.  Asiana gains one event and there has never been an event in the last two years with 10 females.  There are 7 US and 1 America’s professional events eliminated from the calendar in 2015, this is very interesting because the US is 50% of the world’s triathlon market and to eliminate nearly 50% of their races opens the door for other events since these events are statistically full and deep. 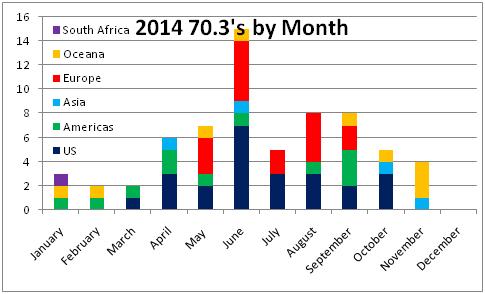 Unlike the Ironman events the 70.3 schedule has a much heavier concentration in June and with the excessive amount of races many of the fields that lack depth on the men’s and women’s side occur in June.  For 2015 there are a lot of changes coming. 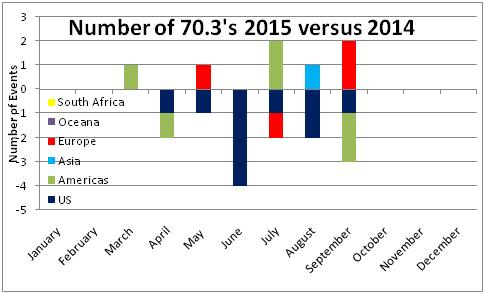 It is very apparent that the smaller/weaker fields in Asia and Oceana do not phase WTC since they have not removed any events even though less than 30% of the events have any depth to the field. In addition Europe added two 70.3 events even thoug. WTC must not feel threatened by Challenge coming to the US even though WTC is not selling out races like they have in the past because they have eliminated 7 Ironman’s and 10 70.3’s from a market that bring the largest quantities of age groupers and professionals that supply many of the most competitive long distance triathlons in the world.  It is no wonder that Challenge is now attacking the America’s full force.

#6) Sponsors
A title race sponsor is not as much looking to get their name of 2000 T-shirts of the competitors and 500 volunteer shirts, but get their name in front of millions on social, web, and print media covering the race. Races without a pro prize purse just become another local triathlon with athletes pouring their heart out for PR’s and bragging rights. Many have argued this point with me but let’s face it, the major triathlon websites and magazines will not be doing write ups on events that lack a pro field.

There are a group of about 40 endemic (wetsuit, bike, shoe) sponsors that make triathlon “tick” and having a non-professional race will decrease the prestige of an event and cause sponsors to not go there. Why sponsor a race that is not going to have a worldwide audience? Sure the local shops and business’ will show up but the big sponsors will just go to the races with the pro fields and sponsor the swim course, sponsor the bike course, and sponsor the run course because millions tune in online to root on their favorite professionals. This also opens the door for sponsors to consider new avenues such as Challenge events or other smaller professional venues going forward.

#7) Race Coverage
Triathlon as a whole exhibited large growth through the 80’s and 90’s for many reasons. One of the biggest is their presence on television. Every month there were programs on national television covering USTS and Ironman races culminating with the coverage of Ironman Hawaii. This growth was huge and key for the growth of the sport in the United States.   It sparked people’s interest to travel to venues and Escape from Alcatraz, race in downtown Chicago, NY, and LA along with creating the mystique of Ironman Hawaii. Millions got to exhibit the likes of a young Lance Armstrong, Mike Pigg, Scott Tinley, Dave Scott, Jimmy Riccitello, and the unbeatable Paula Newby-Fraser, who in their hay day racked up more TV time than the greats of today. Similar coverage was present in Australia causing triathlon to boom. Then at the turn of the millennium triathlon became an Olympic sport and gave another surge in popularity and really began to grow in every part of the world.

Since 2008 WTC has cut the funds of race coverage and now none of their nearly 50 events in the United States (excluding Kona) have television coverage. Races outside of the US that are Ironman branded but not owned still work with media partners and get the races on television and have continued to grow the sport which can be seen by Slowtwitch’s State of Triathlon presentation earlier this year. 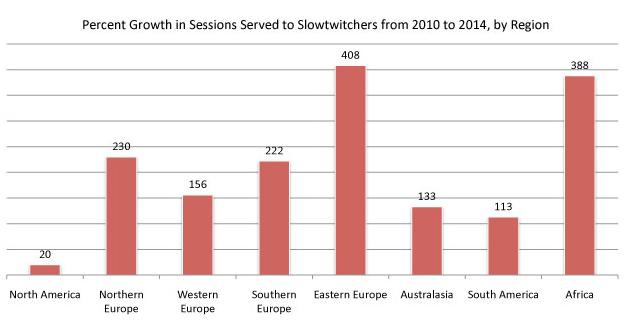 In addition WTC’s “live” coverage of races is simply a camera with a volunteer in front of it at the entry/exit to transition. How hard is it to put 2 knowledgeable people on motorbikes to snap a few shots and give splits of the men’s and women’s races so that their at home fans can follow along? How is it that Women’s Rugby, Miss America, and Ultimate Frisbee get more national television coverage than triathlon? Can somebody please tell WTC that you need to spend (INVEST) a little money to make a lot of money? 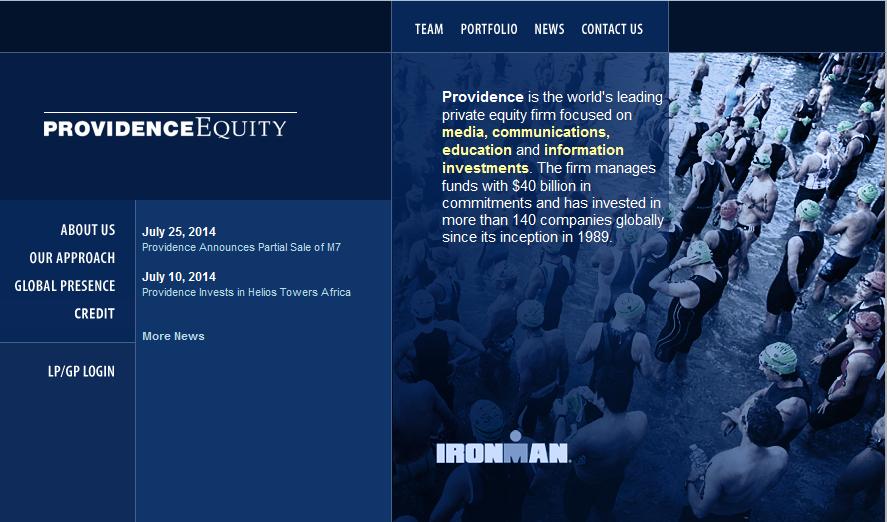 Wait a second, they “specialize” in this…could’ve fooled the millions that tried to tune in to 70.3 World Championships a week ago!

#8) World Championships
In the last decade the creme of the crop has come to Kona and it is very interesting that the fields have been quite consistent with the drop off.  Below is falloff for the top 25 of the men’s field over the last decade. 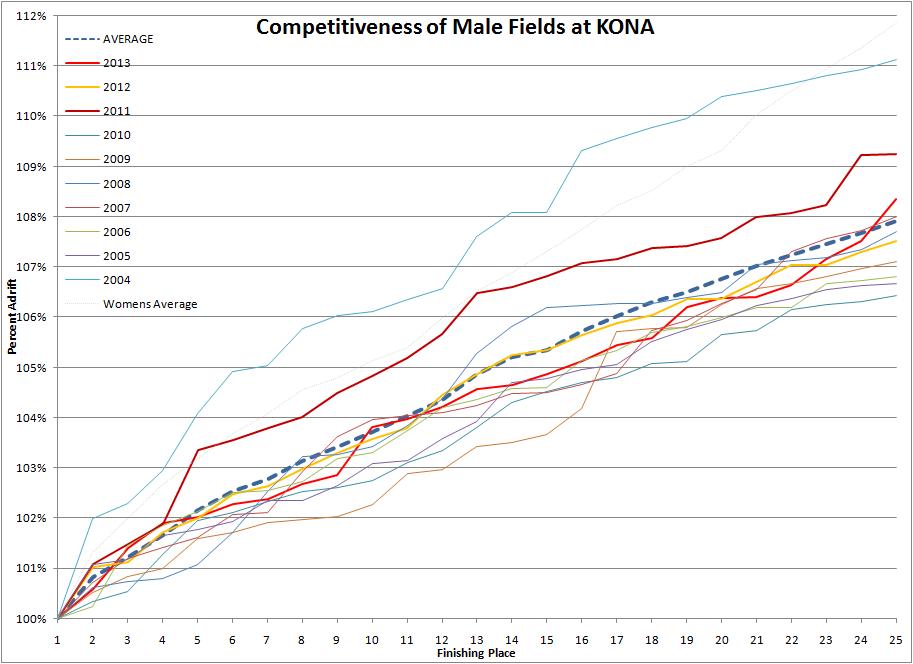 When comparing the men’s to the women’s field on average:

It appears to be right inline with what was discussed in Part I last week.  The current field sizes yield unequal competitiveness’ at world championships with the current numbers.  In order for equivalence via quantity and competitiveness using Ironman’s current cap of ~90 athletes there should be approximately 61 males and 29 females using statistical data.  The current spread is ~53 and ~37 with a proposal of an even split on the table.  This does not seem to even being an option using race data.