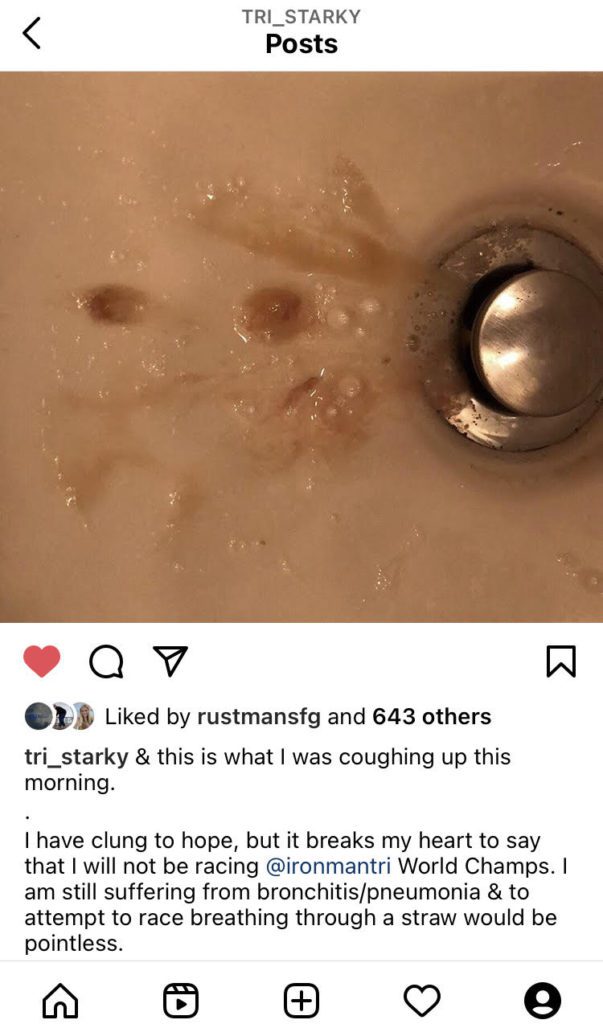 2) October 15, 2019 I returned home and saw a pulmonologist and I was diagnosed with pneumonitis.  I was struggling to breathe with just walking and sitting at rest.  I was prescribed 28 days of a Breo inhaler and a 5 day Medrol dose pack.

3) While in the doctors office I used USADA’s Global DRO website and searched Breo and Medrol dose pack, both came back as prohibited.

4) I cross checked the WADA website to see if there was more information regarding Beta-2 agonist inhalers and the only document I could find was the asthma guidelines (which I do not nor have I ever had asthma).  Below is how it was viewed and read on a cell phone. 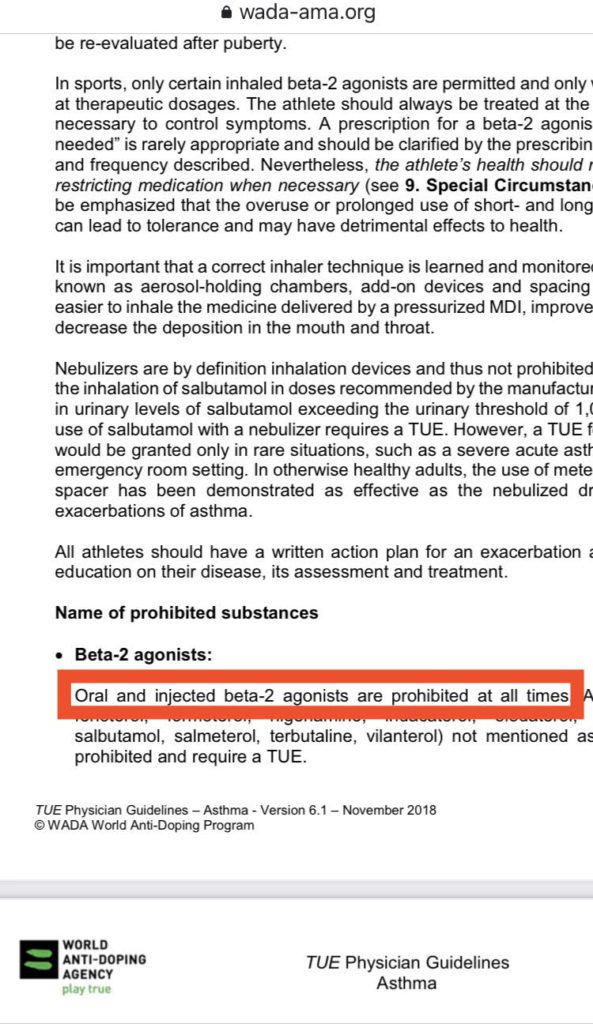 I interpreted the above clearly stating “prohibited at all times.”  At this point I went on to search for more information and alternatives for the Medrol Dose Pack.

5) For the first time in my 15 year career I filed a Therapeutic Use Exemption (TUE) stating if I were to get well enough I intended on competing in 70.3 Waco (12 days out) and Ironman Florida (18 days out).  My doctor filled out the medical information for the TUE  marking it “Acute” and faxed the TUE to USADA on October 15.  Under my doctors supervision, I was taught proper inhaler technique using unit dose inhaler and knowingly took a prohibited substance with the understanding that:

My current state of health met these guidelines.  The next day I received an email from USADA confirming receipt of the TUE.

6) USADA sent a subsequent email on October 21 (6 days later) that the TUE form was incomplete.  At this point I had already completed taking the Medrol dose pack.  I spoke with my doctor and the additional information requested was sent October 23.

7) Oct 25, 1pm I called USADA to confirm they received the fax from Oct 23 and ask for status update since WADA Code ISTUE standard 6.7 states

USADA discussed with me that “I could race, but would do so without an active TUE.”  Five hours after that phone conversation I received an email that the TUE form was submitted to the TUE committee for review.  Of note, this is 10 days after initially faxing the TUE for an acute illness.  At this point the only sign showing hope was starting to feeling relief with the use of these medications.

8) Nov 2, 2019.  I felt well enough to race and Ironman Florida and got drug tested.  I clearly documented on the declaration form that I was taking a Breo inhaler.

9) Nov 8, 2019. I received an email from USADA approving the Medrol Dose pack but denying the Breo TUE.  It stated that I should have taken an alternative inhaler, Advair which is conditionally prohibited.  My doctor submits additional information why Breo was selected over Advair.  Had USADA followed WADA standards and gotten back to me in a timely fashion changes to my treatment potentially could have been made.

10) Dec 5, 2019. I received an email from Ironman Anti-Doping with a sanctioning letter.  It stated that I will be suspended 4 years with additional fines if I do not cooperate with Ironman.  Ironman refused to negotiate a harmonized settlement equivocal to other Breo anti-doping cases.

The table below depicts all of the Breo cases ruled by USADA.  In these cases, NONE of these athletes applied for a TUE prior to testing positive thus the acts were purely negligent.

Since Ironman was unwilling to negotiate a harmonized sanction, it forced me to appeal the TUE to WADA.

11) Mar 6, 2020.  I received an email with the WADA ruling discussing my case.  The email started with the ISTUE Standard 4.1(a) which explains that I followed doctors orders and the prescription was necessary given my current state of health.  Next, 4.1(b) which clearly stated that Breo taken for 28 days was absolutely necessary and in no way performance enhancing (shown below).  Additionally, in 4.1(c) they stated that I should have been prescribed Advair which was conditionally prohibited. 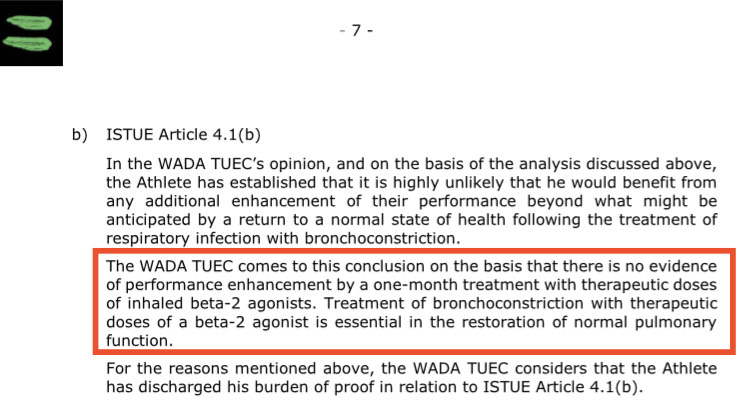 12) May 7, 2020. The next step for me in the process was to appeal to Court of Arbitration of Sport (CAS), which costs over $13,000 for the athlete.  USADA & Ironman tried to obstruct the case from getting heard by REFUSING TO PAY their portion.  In order to get the case heard I had to pay close to $30,000 USD.

13) June 24, 2020.  In short the CAS Arbitration was nothing short of a medical malpractice suit.  Instead of a clearer picture the case became more confusing.  The USADA expert witness (doctor) said that what USADA and WADA recommended for treatment was not correct and boasted that “I would have been ill for a very long time.” Also stating, there is no way he could have competed in an Ironman 3 weeks later.  I should have used a different inhaler, in his opinion, albuterol which is also conditionally prohibited.  If the TUE committees state I should have used Advair, the USADA expert witness doctor stated I should use albuterol, and my doctor prescribed me Breo; how the hell am I with no medical degree supposed to know what to take if practicing physicians cannot agree?  After 12 hours of doctor testimony, USADA did not even cross examine me.  The arbitrator ruled the WADA treatment which was Advair should have been used thus leaving me ill for a very long time (as per the USADA expert doctor).  I am still confused as to why it is acceptable for the Arbitrator to conclude it is acceptable to recommend a treatment that would leave a patient ill for a very long time.

14)  WADA removes BREO from the 2021 Prohibited LIST shortly after my CAS arbitration.

15) Oct 22, 2020. I attended the Ironman Arbitration that was simple and straight forward.

– My stance – I was really sick, I went to see a pulmonologist and checked what my doctor prescribed me with the USADA’s GlobalDRO website. I cross checked it with the WADA site and followed the TUE process.  I took a prohibited substance with the understanding that “treatment should not be withheld, as an athletes health and well-being remain the top priority” per the USADA athlete handbook.  I followed up with emails and phone calls to USADA due to their lack of communication.  Ultimately, the treatment I received from my doctor worked, I got healthy.

– Ironman’s stance – I should serve a 4-year penalty which is the harshest penalty in history of Beta-2 agonists for USADA because I knowingly took a prohibited substance and competed. I should have disregarded my doctor and put my health aside for 24 days until USADA armchair quarterbacked my physicians decision.

Nov 25, 2020.  More than $75,000 in lawyers fees, arbitration, application costs, and 407 days later, the sanction handed down is harshest vilantoral case ever handed out, 13 months, for taking something necessary to restore health and not performance enhancing. The start date for the sanction is retroactive to December 5, 2019.

This is very simple, I was sick and needed medication — that was NOT performance enhancing. This process is broken.  I have stated it for years and now I have had the privilege to experience it 1st hand.  It’s time to REVOLUTIONIZE and modernize this process.

PS – I am not, nor have I ever been @therealstarky